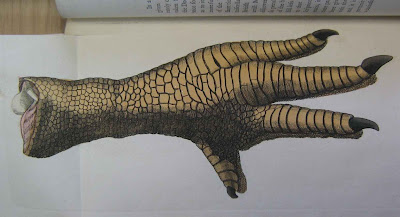 Welcome to the first Bibliopole posting. Since my life normally revolves around items of varying antiquity, I thought, in a twist on the old axiom of adapt or die, I'd better jump on the technology bandwagon in order to promote the ancient.


What better first posting then, to discuss the Dodo; and moreover, the missing foot of said extinct bird. In Robert Hubert's Catalogue of Many Natural Rarities, 1665, a dodo's foot appears in the inventory as 'legge of a Dodo'.

In 1681, Nehemiah Grew described the same piece of anatomy in his Musaeum Regalis Societatis:

The leg here preserved [at the Royal Society] is covered with a reddish yellow scale. Not much above four inches long; yet above five in thickness, or round about the joints: wherein though it be inferior to that of an Ostrich or Cassoary, yet joined with its shortness, may render of it almost equal strength.

Later, in 1793, George Shaw and Frederick Nodder illustrated this foot in their The Naturalist's Miscellany, an image of which is at the top of this post (plate 143), together with an explanatory text, including Grew's words above. Earlier in the work, they had published an image of the whole bird (plate 123): 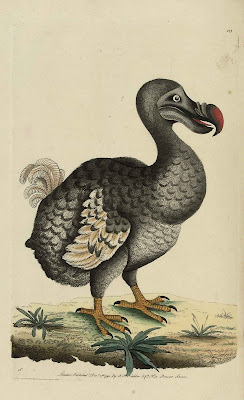 By this time, of course, the dodo had been extinct for about a hundred years, and Shaw and Nodder were perplexed whether the bird was in actual fact an albatross:

can it be possible that an Albatross, (Diomeda exulans Lin.) not fully grown, and inaccurately represented by a draughtsman, may have given rise to the supposed existence of the Dodo?

It still seems amazing that so little evidence survives of the bird. Errol Fuller has pulled together all the evidence to show that only 16 written accounts, contemporary of the bird during its brief co-existence with humans, have come down to us; and there are only 15 original illustrations (Shaw & Nodder's is probably derived from the famous Savery picture in the Natural History Museum, London).

The physical remains are extremely scant: there's the Oxford Dodo, the skulls in Copenhagen and Prague, and a rather slight assemblage of bones from the Mare aux Songes. Alas, the British Museum foot, like the species itself, is missing. Shaw & Nodder saw it in the museum, and made the only known illustration of it. The foot entered the British Museum from the Royal Society sometime during the 18th-century. It was then moved from the museum in Bloomsbury to the new Natural History Museum site in South Kensington in the 19th-century, and within living memory was safely kept there. Sometime during the second-half of the 20th century it disappeared. As Fuller says, 'Whether stolen, accidentally destroyed or simply misfiled is not known'.