Many apologies for being silent for so long, but a combination of work and holidays has kept me from the blogger's keyboard.

Anyway, I came back to work to find that one of my colleagues, Sarah Vowles, has uncovered the following hitherto unknown drawing of a dodo: 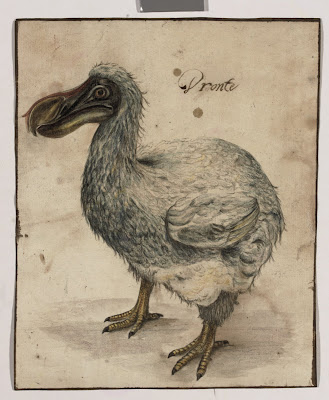 Here's Sarah's description in her own words:

This previously unpublished drawing of a dodo is an important and exciting addition to the known images of this iconic extinct bird. First recorded by Dutch mariners who explored Mauritius in the last years of the 16th century, the dodo was extinct by 1700, and has fascinated the popular consciousness ever since.

Early images, which are extremely rare, can usually be linked to one of a handful of prototypes. However, this characterful study has no relation to any of the known visual sources. It rivals in vivacity the representations by Jacob Hoefnagel (circa 1610; National Library of Austria) and the head study, possibly from life, by Cornelius Saftleven (1638; Boymans Museum, Rotterdam) (E. Fuller, Dodo: From Extinction to Icon, London, 2002, pp. 80-81, 111).

The possibility that the present drawing was also sketched from life, while unlikely, cannot be completely discounted. Live dodos are known to have been transported from Mauritius as curiosities. A dodo was recorded at the menagerie of the Mogul Emperor Jahangir in about 1625 (Institute of Oriental Studies, St Petersburg; Fuller, pp. 94-5); and, in about 1638, Sir Hamon L’Estrange saw a live dodo exhibited in London (Fuller, p. 69).

The present drawing is unusual, however, in the lightness of the plumage. It has some similarities to the colouring of the bird shown in a watercolour by Pieter Holsteyn (Teylers Museum, Haarlem), dating from the 1630s. Traditionally called the White Dodo of Réunion, the bird in the Teylers Museum drawing is now thought to show an albino dodo (Fuller, p. 170), which may also be the case in the present drawing.

The inscription on this drawing, ‘Dronte’, was the Dutch 17th-century name for the dodo, although at this period it was also used in a number of other languages including French and Italian.

The Daily Telegraph took this view on it: http://bit.ly/VbqH8
Posted by Marmarth at 15:03